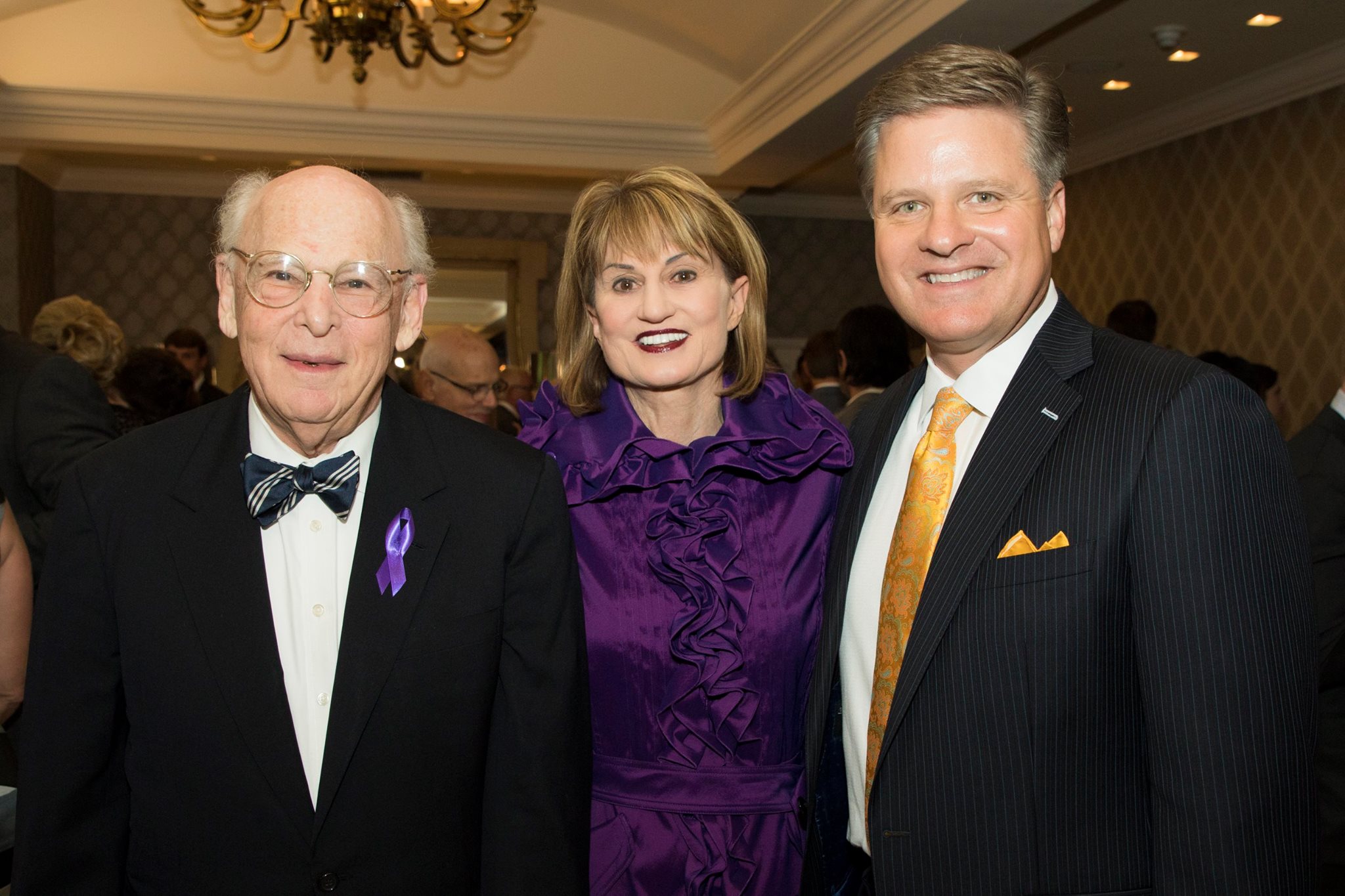 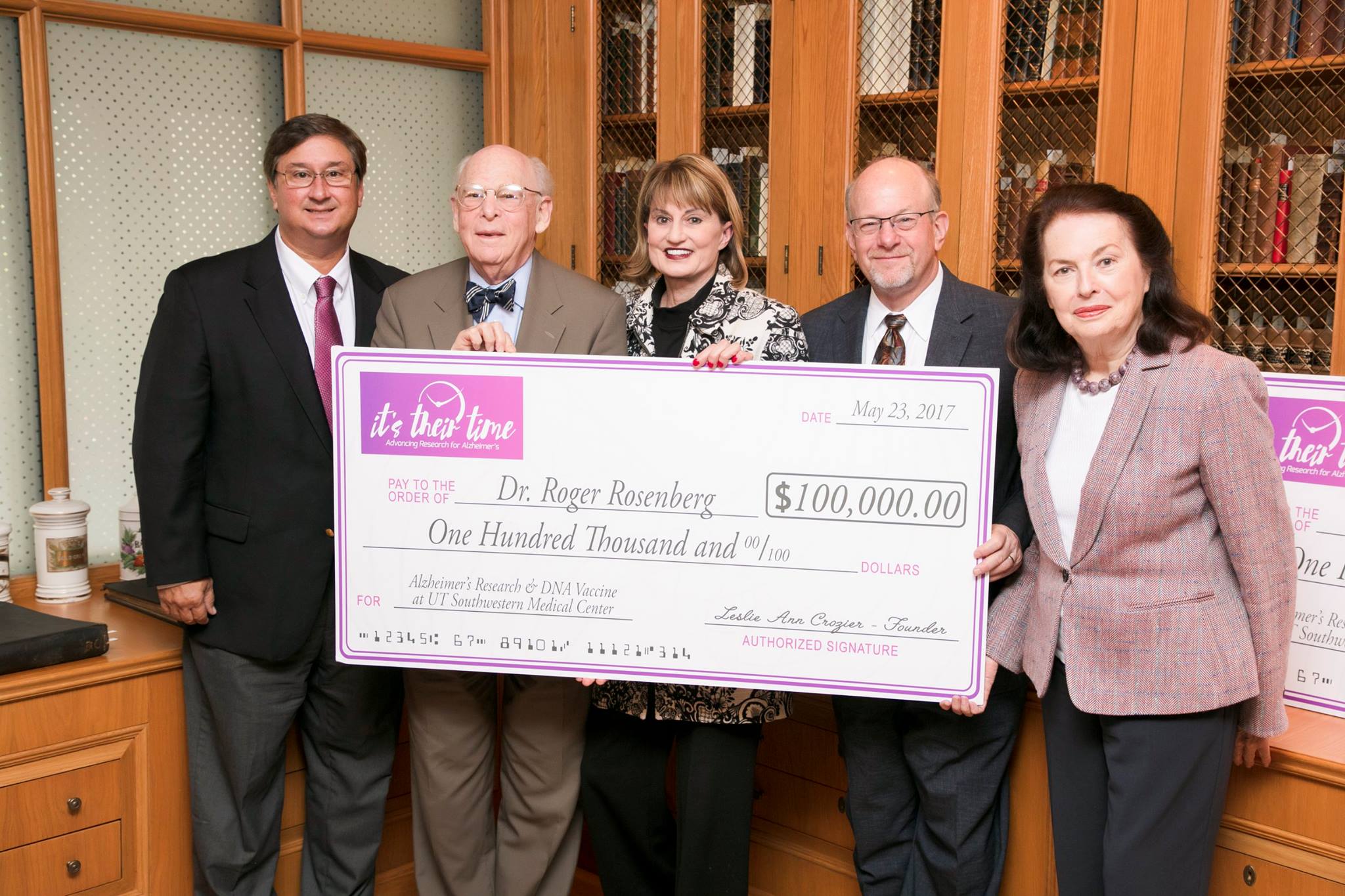 Dallas’ newest Foundation, It’s Their Time, committed to Advancing Research for Alzheimer’s, is proud and honored to award world-renowned Dr. Roger Rosenberg of UT Southwestern Medical Center a $100,000 Grant for his DNA Vaccine.  Established 116 days ago by founder Leslie Ann Crozier, It’s Their Time held a Kick-Off Celebration on May 23rd to a sold-out audience at The Mansion on Turtle Creek.

“It was a magical evening filled with love, laughter, and lots of support. The generosity of all our May 23rd guests was overwhelming.  Being able to award Dr. Rosenberg a $100,000 Grant from the evening proceeds exceeded all of our Committee’s expectations, especially given that the Charity is only a couple of months old,” confirmed Leslie Ann Crozier.

Dallas’ favorite meteorologist, WFAA Pete Delkus, was the evening’s Master of Ceremonies and was welcomed by “thunderous” applause, as the Ballroom filled with sounds of thunder and lightning!  Pete was to leave halfway through the program to get back to the TV station; however, he was having so much fun that he stayed until the Live Auction and rushed to make the 10:00pm ABC News.  During the 10:00pm broadcast, Pete shared fun pictures and evening highlights.

When Leslie took the stage and shared five shocking Alzheimer’s statistics with the audience . . . you could have heard a pin drop.  One of the most surprising facts was that women in their 60s are twice as likely to develop Alzheimer’s during their life as they are to develop breast cancer.

After a powerful video introduction, the evening’s recipient, Dr. Roger Rosenberg, took the stage to a standing ovation.  He unveiled his UT Southwestern Medical Center Press Release, sent out just hours earlier, announcing that his DNA Vaccine “is on a shortlist of promising antibody treatments” that may prevent or cure Alzheimer’s.

Popular singer songwriter Aubree-Anna sang “Wind Beneath My Wings” and “Over The Rainbow” as tears flowed throughout the Ballroom.

The evening wrapped up with a spectacular Live Auction that included 3 of Leslie’s young 20-something nieces/nephews bidding $8,500 and winning the Lady Gaga Box Suite.  The audience was in shock, as Leslie’s nephew, Collin, took the stage and explained that they really only had $85 . . . however his 90-year-old grandparents, who could not attend, bought the package absentee to support the family and the Charity!

Evening Sponsors whose contributions helped make the evening an even greater success, include:

As the first fundraising chapter comes to a close, It’s Their Time friends and supporters are looking forward to a rewarding journey creating a storybook filled with many more events, and many more memories.